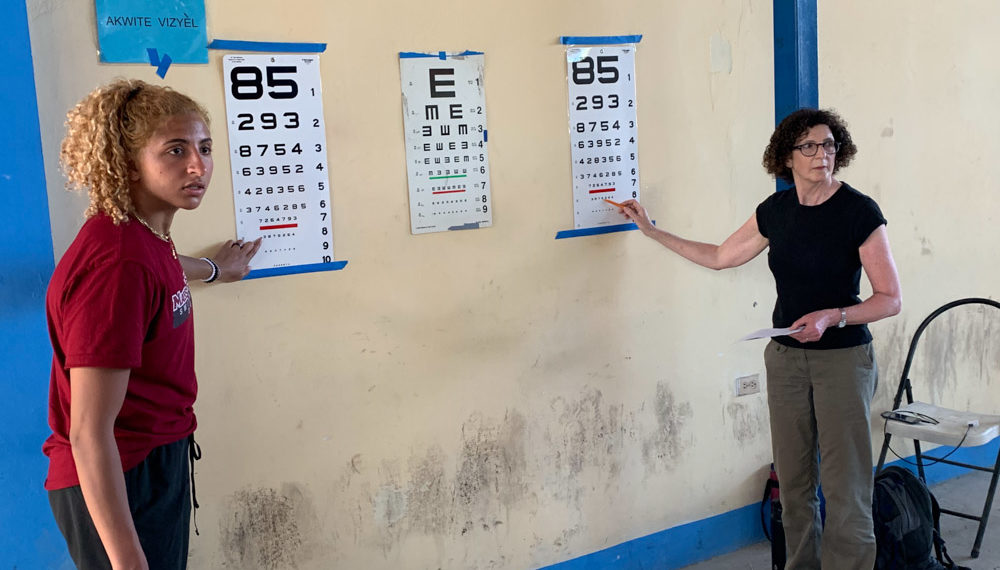 We were accompanied by SEE surgeon Dr. Jeremy Joseph.

We are making 10 eyeglasses back home to be delivered later… we delivered eyeglasses previously made from the January trip to Joseph. He will find their owners.

Many thanks to our clinic coordinator, Joseph, for his diligent work in organizing our different sites, and interpreters Marc, Maurice, Gemes, Savio and Brez for their help with patient care.

Dr. Joseph and Dr. DuPuy performed 60 surgeries for the week, these were not all ours but a lot of them were. I will get a final number of cataract patients so that we can pay the clinic.

We hired another van to transport our patients the day after 3 we were at a clinic. We had them make two runs after the day at New Hope hospital. A donation was made by Dr. Mike Gordon to cover this expense. This method was very successful in getting our patients to the Vision Plus Clinique.
Since we only had 3 docs, we decided to do both refraction and eye health by the same person, rather than overwhelming one doc in refraction or eye health. This worked out very well and I think I will continue this practice even when we have more. You know all the information about the patient and I feel, probably served the patient better.

Our group also spent about 2 hours post trip working on consolidating and updating the dates on the boxes of eyeglasses. I encourage all trips not only to take some of the older boxes from storage but also consolidate and update what is in them when you put them back.
A big thank you to Dr. DuPuy and VPC for accepting our patients and working with Dr. Joseph to take care of them.
Despite the travel warning, all was calm in CAP and the surrounding areas.
Respectfully submitted,

VOSH believes in the freedom to see. Providing the gift of vision and eye health to people worldwide. We facilitate the provision and the sustainability of vision care worldwide for people who can neither afford nor obtain such care. Our goal is to increase our global impact whenever possible by supporting sustainable eye clinics, optometry schools and optometric educators in areas lacking sufficient eye care.